27 September 2016 – Astro-Weather: This is the time of year when, during the evening, the dim Little Dipper “pours milk” into the bowl of the Big Dipper 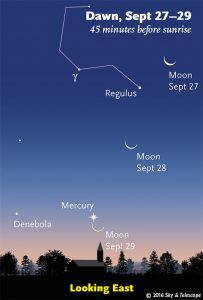 As dawn brightens Wednesday morning the 28th, spot the thin crescent Moon Regulus with Mercury below it

“Rarely do we find men who willingly engage in hard, solid thinking. There is an almost universal quest for easy answers and half-baked solutions. Nothing pains some people more than having to think” ~ Martin Luther King

1066 – William the Conqueror begins the Norman conquest of England 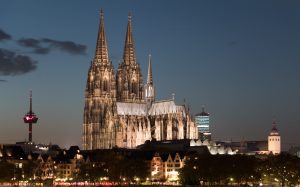 1722 – Birthday of Samuel Adams, statesman, political philosopher, & one of the Founding Fathers of the United States. As a politician in colonial Massachusetts, Adams was a leader of the American Revolution, & was one of the architects of the principles of American republicanism that shaped the political culture of the United States. He was a second cousin to President John Adams

1825 – The world’s first public railway to use steam locomotives, the Stockton & Darlington Railway, is ceremonially opened

1854 – The steamship SS Arctic sinks with 300 people on board. This marks the first great disaster in the Atlantic Ocean

1875 – The merchant sailing ship Ellen Southard is wrecked in a storm at Liverpool. 400 die

1896 Birthday of Sigismund Von Gleich, German Anthroposopher. While serving in the army he became ill with lung disease, & during convalescence was given a book by Rudolf Steiner. He was soon immersed in Steiner’s philosophy, & became one of the most prolific lecturers & writers in the early years of the anthroposophical movement. He fled Nazi Germany in 1936, after publishing The Transformation of Evil, And the Subterranean Spheres of the Earth

1905 – The physics journal Annalen der Physik received Albert Einstein’s paper, “Does the Inertia of a Body Depend Upon Its Energy Content?“, introducing the equation E=mc²

1908 – The first production of the Ford Model T automobile was built at the Ford Piquette Avenue Plant in Detroit, Michigan

1996 – The Julie N- a tanker ship, spills thousands of gallons of oil after crashing into the Million Dollar Bridge in Portland, Maine 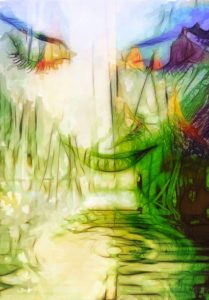 MY POD (Poem Of The Day)

A goatherd
In lions clothing…

An oracle
Whiffing the mists of Delphi

So my dear friends, when the flowers fade in the autumn, we can choose not to turn away in antipathy from the decay, instead we can enter into right relationship by warming our mind with a loving heart, & with a sense of wonder, stimulate our soul’s imaginative power; knowing that we can succeeded thru our Heart-Thinking in contributing to the progress of spirit in the world, by enabling, thru our awaken consciousness, the elemental beings to slip out of their blossoms when they wither & become seed. We can lead the elemental beings up into the spirit for which it yearns, when we can permeate ourselves with the powerful strength of Michael.

Infusing thought with cosmic intelligence with you 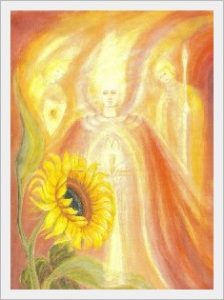 Activating Our ‘Gemut’: The mind warmed by a loving heart & stimulated by the soul’s imaginative power – Hazel Archer Ginsberg

If I’m to be a valiant knight, Then there’s a battle I must fight , And I must choose right from the start, Not strength of arm But strength of heart, My sword shall of good steel be made, And love the keenness of the blade

Verse for the Michaelic Age:  ALL

We must eradicate from the soul all fear and terror of what approaches us from the future. We must acquire serenity in all feelings and sensations about the future.

We must look forward with absolute equanimity to whatever may come.  And we must think only that whatever comes is given to us by a cosmic guidance full of wisdom.

It is part of what we must learn in this age, namely, to live without any security in material existence and to live with pure trust in the ever-present help of the spiritual world.

Truly, nothing else will do if our courage is not to fail us. For this let us seek awakening to the reality of the spirit from within ourselves, every morning and every evening. ~Rudolf Steiner