Ostara and The April Fool, an imagination by Hazel Archer Ginsberg 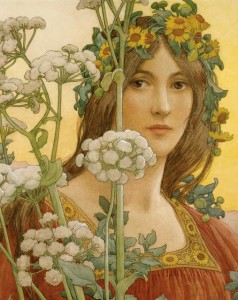 You are walking in a dense forest. The sky is overcast, and the woods are gloomy, although occasionally, a feeble ray of sunlight makes its way through the clouds and the trees. The branches of the trees are bare, although the tips are just beginning to bud. Old leaves from last year’s fall scurry about your feet as an occasional gust of wind blows them about. The ground is, for the most part bare, with occasional patches of snow in the shade. Hints of new green life make their way up through the snow and dead leaves.

As you walk, you notice a grove of beautiful white birches, the pale glint of their trunks and branches, a pleasant contrast in the otherwise dark woods. You walk towards the birch grove and then deep into it. When you are surrounded by the birches, you notice a large tree that looks as if it has been struck by lightning. It’s upper trunk has been split in two, the inner wood has been exposed to the air, dead leaves have blown their way into the nooks of the tree, in every way this tree looks as dead as it can be.

Suddenly you hear a whimsical whistle from behind the fallen lightning struck branches. Out pops “THE FOOL” in his colorful patch work coat, holding his knapsack up on a stick, a white rose in his hand, with a wolf cub snapping at his heels…

“OH DON’T MIND THE WOLF FAWNING ABOUT, HE KEEPS ME HONEST.
I SEE YOU WERE LAMENTING ABOUT THE TREE. DO YOU REALLY THINK IT’S DEAD (He laughs) REMEMBER, EVERY ENDING IS BUT A NEW BEGINNING. IT’S ALL ABOUT TRUST. BELIEF, IN THE ULTIMATE GOODNESS OF CREATION – THAT LIFE HAS A POINT. THAT DEATH IS TRANSFORMATION. THAT SUFFERING CAN BE PURPOSEFUL, WHEN WE BEGIN LIVING CONSCIOUSLY, IN THE HOPE OF A BRIGHT ETERNAL NOW.

OK, I KNOW, AT FIRST GLANCE THINGS SEEM DARK, AND YES, IF YOU LOOK AT THE EVIL OF GREED AND WAR IN THE WORLD, AT THE LOSS OF YOUNG LIVES, THE FAILURE OF PRINCIPLE, BELIEVING IN PEACE, HAVING HOPE & TRUSTING, CAN LOOK PRETTY (clears his throat) FOOLISH. BUT BELIEVE ANYWAY!!! THAT’S MY MOTTO. SOMETIMES YOU HAVE TO RISK, TO JUMP INTO THE ABYSS OF BELIEF, TO GO AGAINST EVERYTHING SOCIETY SAYS IS SENSELESS. IT MEANS TRUSTING THE HIGHER GOOD. THE INNER FORCES. WHICH ARE AT THE HEART OF GREAT EVOLUTIONARY ENDEAVORS.
RISK LOOKING LIKE A FOOL. LIVE IN THE MOMENT, OF HOPE FULFILLED.
BE PEACE & PEACE WILL PREVAIL.

HEY WHAT’S THAT OVER THERE…(laughs,) MADE YOU LOOK…

And with that “THE FOOL” is gone. Make sure your shoe laces aren’t tied together as you walk closer to the tree.

You are surprised to see a bright light outlining the figure of a woman. She is clad in brilliant greens and sunny yellows. She holds a large golden basket. Her gaze is steady, her eyes make you think of clear streams running in the middle of old forests, her skin reminds you of the first fair flower of spring, and her hair is long and unbound. At her feet sits a small brown rabbit nuzzling the hem of her skirt. She gestures, indicating that you should come forward. You walk towards her. She points at her covered basket, and lifts the cloth. Inside, you see an astounding array of pastel eggs, all colors, all patterns. You can think of nothing better than to pick one of these beautiful eggs, and have it for your very own. Your hand reaches out, and she shakes her head. You realize that while she wants you to have an egg, she wants you to pick it sight unseen. So, you close your eyes, reach out your hand, and reach into the basket. Eyes still closed, you draw your hand back, holding an egg. You open your eyes, and look upon your egg. What does it look like?

Think to yourself what the decoration on the egg means, and why Ostara, The Goddess of The Spring Resurrection wants you to have this particular gift for the coming season.

After you have looked at your egg, you raise your head to thank the Goddess, but she is gone. You look about for her in vain. You wonder if it has all been a dream. The reality of your heart tells you otherwise, and you know you have received the blessing of the Green Goddess.

As your attention moves from yourself to the forest, you realize that the trees now have tiny, but beautifully formed green leaves at the end of their branches. And you notice that the birch tree struck by lightning, the one that looked dead, now has green shoots rising from its split trunk. As you make your way out of the birch grove, it seems that the clouds have lightened, and even as you think this, the sun comes out. Small, barely formed flowers lightly scent the forest floor, birds are singing, and the rich smell of moist earth fills your nose.

Softly at first you hear that care-free whistling coming from what seems like everywhere. As you mount the crest, you see “THE FOOL” once again. He’s playing catch with the wolf, precariously close to the edge of the precipice. He calls out to you…

“A MONK WAS OUT WALKING IN THE MOUNTAINS OF ANCIENT JAPAN.
HE ENCOUNTERS A WILD TIGER. AND AS HE IS FLEEING, HE SLIPS OVER A CLIFF, BUT MANAGES TO GRAB HOLD OF A GNARLED ROOT AT THE EDGE. HE LOOKS DOWN, & SEES SHARDS OF BROKEN ROCKS FAR BELOW. HE LOOKS UP & SEES THE WILD CAT, SNARLING AT HIM IN HUNGER. AS HE LOOKS AROUND, HE ALSO SEES BESIDE HIM A BUSH WITH A SINGLE BRIGHT, SUCCULENT BERRY ON IT. HE LOOKS UP. HE LOOKS DOWN.
HE SMILES, & PLUCKS THE BERRY, & POPS IT INTO HIS MOUTH…
HOW SWEET IT TASTES!”
(He begins to whistle, letting it swell & then fade out)

This is the way of the wise fool. He knows that a life lived in trust is sweet. Take this Zen teaching into your heart, into your mind, into your body.

As you make your way out of the forest, you wonder how you could have found this green growing place gloomy, it seems so alive, and pleasant to walk through, full of hope and positive forces, which you can call on anytime, to influence your choices, as you take the leap, into the joys of Spring.