The Moon this evening, barely short of first quarter, forms a wide triangle with Saturn to its right and Antares twinkling below the midpoint between them.

You can tell that summer’s days are numbered: When darkness falls, Cassiopeia has risen about as high in the northeast as the Big Dipper has dropped in the northwest.

Also, with August nearing its end, you can say hello to the Double Cluster in Perseus without having to stay up late. After dark, find the tilted W of Cassiopeia partway up the northeastern sky. Note the two stars of its lower-left segment (the faint end of the W). Look for two little irregular cotton puffs, touching each other & tilted diagonally, as a distinct enhancement of the background Milky Way.

“What is to be the starting force and impulse for events in social and ethical life must come out of the spiritual world.” Rudolf Steiner, New Spiritual Impulses in History” Dornach 16 December, 1917

430 – Deathday of Saint Augustine an early Christian theologian & philosopher whose writings influenced the development of Western philosophy.  Among his most important works are The City of God & Confessions. In his early years, he was heavily influenced by Manichaeism & afterward by the Neo-Platonism of Plotinus. He “established anew the ancient Faith.” After his conversion to Christianity in 387, Augustine developed his own approach to philosophy & theology, believing that the grace of Christ was indispensable to human freedom. He is the patron saint of brewers, printers, theologians, the alleviation of sore eyes.

632 – Deathday of Fatimah, daughter of the Prophet Muhammad

1189 – The Third or Kings’ Crusade, was an attempt to reconquer the Holy Land. The campaign was largely successful, regaining the important cities of Acre & Jaffa, but it failed to capture Jerusalem, the emotional & spiritual motivation of the Crusade. After the Crusaders had driven the Muslims from Acre, Richard the Lionheart finalized a treaty granting Muslim control over Jerusalem, but allowing unarmed Christian pilgrims & merchants to visit the city.

1749 – Birthday of Johann Wolfgang von Goethe, German author, poet, playwright, & diplomat. In 1888, as a result of his work for the Kürschner edition of Goethe’s works, Rudolf Steiner was invited to work as an editor at the Goethe archives in Weimar. As well as the introductions & commentaries to 4 volumes of Goethe’s scientific writings, Steiner wrote 2 books about Goethe’s philosophy: The Theory of Knowledge Implicit in Goethe’s World-Conception (1886), which Steiner regarded as the epistemological foundation & justification for his later work, & Goethe’s Conception of the World (1897). Steiner writes about Goethe in many of his lectures, including commentaries on his play Faust.

1833 – The Slavery Abolition Act through most of the British Empire

1859 – The Carrington event, Solar Storm disrupts electrical telegraph services & causes aurora to shine so brightly that they are seen clearly all over the earth’s middle latitudes.

1943 – World War II: In Denmark, a general strike against the Nazi occupation

1957 – U.S. Senator Strom Thurmond, an ardent segregationist, begins a filibuster to prevent the Senate from voting on Civil Rights Act 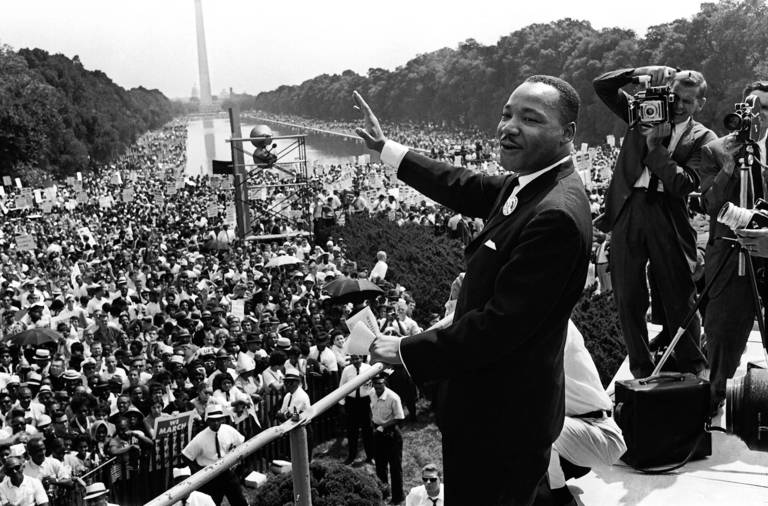 1963 – March on Washington for Jobs & Freedom: The Reverend Martin Luther King, Jr. gives his I Have a Dream speech

1968 – Riots in Chicago, during the Democratic National Convention

1990 – Iraq declares Kuwait to be its newest province

~There has arisen
From a deep confinement: my Self
Finding itself as cosmic revelation
Within the sway of time & space
& far & wide the world displays to me
An archetype Divine –
The truth of my own image
In your eyes..
~hag

Goethe and the Evolution of Consciousness, by Rudolf Steiner, Dornach, August 19th, 1921

“…As a young man Goethe necessarily grew up in the outlook of his contemporaries and in the way in which they regarded the world and the affairs of human beings. But he really did not feel at home in this world of thought. There was something turbulent about the young Goethe, but it was a turbulence of a special kind. We need only look at the poems he composed in his youth and we shall find that there was always a kind of inner opposition to what his contemporaries were thinking about the world and about life.

But at the same time there is something else in Goethe — a kind of appeal to what lives in Nature, saying something more enduring and conveying much more than the opinions of those around him could convey. Goethe appeals to the revelations of Nature rather than to the revelations of the human mind. And this was the real temper of his soul even when he was still a child, when he was studying at Leipzig, Strassburg and Frankfurt, and for the first period of his life at Weimar.

Think of him as a child with all the religious convictions of his contemporaries around him. He himself relates — and I have often drawn attention to this beautiful episode in Goethe’s early life — how as a boy of seven he built an altar by taking a music-stand and laying upon it specimens of minerals from his father’s collection; how he placed a taper on the top, lighting it by using a burning-glass to catch the rays of the sun, in order, as he says later — for at seven years he would not, of course, have spoken in this way — to bring an offering to the great God of Nature.

We see him growing beyond what those around him have to say, coming into a closer union with Nature, in whose arms he first of all seeks refuge. Read the works written by Goethe in his youth and you will find that they reveal just this attitude of mind. Then a great longing to go to Italy seizes him and his whole outlook changes in a most remarkable way.

We shall never understand Goethe unless we bear in mind the overwhelming change that came upon him in Italy. In letters to friends at Weimar he speaks of the works of art which conjure up before his soul the whole way in which the Greeks worked. He says: “I suspect that the Greeks proceeded according to those laws by which Nature herself proceeds, and of which I am on the track.” — At last Goethe is satisfied with an environment, an artistic environment enfilled with ideas much closer to Nature than those around him in his youth. And we see how in the course of his Italian journey the idea of metamorphosis arises from this mood of soul, how in Italy Goethe begins to see the transformation of leaf into petal in such a way that the thought of metamorphosis in the whole of Nature flashes up within him.

It is only now that Goethe finds a world in which his soul really feels at home. And, if we study all that he produced after that time, both as a poet and a scientist, it is borne in upon us that he was now living in a world of thought not easily intelligible to his contemporaries, nor indeed to the man of to-day.

Those who embark upon a study of Goethe equipped with the modern scholarship acquired in every kind of educational institution from the Elementary School to the University, and with habitual thought and outlook, will never understand him. For an inner change of mental outlook is essential if we are to realise what Goethe really had in his mind when, in Italy, he re-wrote Iphigenia in Greek metre, after having first composed it in the mood of the Germanic North. Nor is it possible to understand Goethe’s whole attitude to Faust until we realise the fundamental nature of the change that had taken place.

After he had been to Italy, Goethe really hated the first version of Faust which he had written earlier. After that journey he would never have been able to write the passage where Faust turns away from the

“… heavenly forces rising and descending, Their golden urns reciprocally lending,” where he turns his back upon the macrocosm, crying: “Thou, Spirit of the Earth art nearer to me.”

…And many other passages can be read in the same sense. Take, for instance, that wonderful treatise written in the year 1790, on the Metamorphosis of the Plants (Versuch, die Metamorphose der Pflanzen zu erkennen). We shall have to admit that before his journey to Italy Goethe could never have had at his command a language which seems to converse with the very growth and unfolding life of the plants. And this is an eloquent indication of the place of Goethe’s soul in the whole sweep of evolution. Goethe felt a stranger to the thought of his time the moment he was obliged inwardly to ‘digest’ the result of contemporary scientific education. He was always striving for a different kind of thinking, a different way of approaching the world, and he found it when he felt that he had brought to life within him the attitude of the Greeks to Nature, to the World, to Man…” http://wn.rsarchive.org/Lectures/19210819p01.html

Dear Friends – The Elderberries Three-Fold Café has been on Sunset Blvd. in the heart of Hollywood for over 9 years. They provide not only good healthy food, but nutrition for the soul – Rudolf Steiner’s Weekday Exercises are even on the back of the menu! The café is a hub for youth, hosting anthroposophical study groups, music, alternative film screenings etc – providing support for inner practices, meaningful work to those in need, & platforms for individual creative expression -imbuing all they do with a love for the future of our world.

Our 3-fold friends, Dottie Zold, Daniel Evaeus & Frank Agrama, came in from Los Angeles in March to speak with the Branch Council & have an open conversation with members & friends, about the possibility of opening a second Elderberries 3-fold Café in the unrented space at the branch*.

It has long been the vision of Elderberries to create a “Michael Grail-Road” establishing 3-fold Café’s around the world where youth can come to find themselves thru anthroposophy.

Please help us pave the way for a 3-fold Cafe in the heartland!

If you prefer to give a donation by check, or would like a receipt for tax purposes contact Chuck@ChuckGinsberg.com

*The good will of the Branch council & the membership at large shall determine whether this initiative will reside at the Branch. (Stay tuned for a ‘Special Members Meeting’ TBA) If it is not wanted here, Elderberries may take root near a Waldorf School or other Chicago location.

You can get your donation back upon request if it doesn’t come thru, or you can choose to support the mission in LA, or other future hubs in the Michael-Grail Road around the country.