21 December 2016 – Astro-Weather: The Ursid meteor shower peaks tonight. The shower’s radiant — the point from which the meteors appear to originate — lies in the constellation Ursa Minor, near the Little Dipper’s bowl. The radiant is visible in the north all night, but it climbs higher as dawn approaches. The waning crescent Moon won’t interfere much after it rises around 2 am tomorrow morning, though your best views likely will come between 11 pm & 1am. Observers with clear skies should be able to see 5 to 10 Ursid meteors per hour. 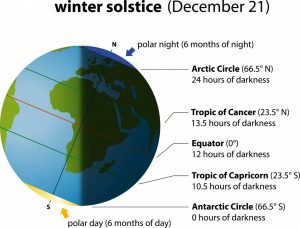 Earth’s Winter Solstice occurs at 6:44 am CST. At that moment, the Sun reaches its farthest point south in the sky. The solstice marks the official beginning of winter in the Northern Hemisphere, & tonight has more hours of darkness than any other. From mid-northern latitudes, however, the earliest sunset occurred about two weeks ago & the latest sunrise won’t happen until early January. 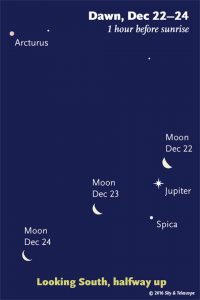 Step out at the beginning of dawn Thursday morning the 22nd, & high in the south you’ll find Jupiter, fainter Spica, & the waning crescent Moon in a line.

“When we look up to the wonder of the starry world, when we contemplate the whole process of the universe with its glories and marvels, then we are led at last to the feeling that all the glory that lies open to our view in the whole universe that surrounds us only has meaning when it is reflected in an admiring human soul.” ~Goethe

Triumphant in man’s deepest soul
Lives the Spirit of the Sun;
Quickened forces, set astir,
Awake the feelings to His presence
In the inner winter life.
Hope, impulse of the heart,
Beholds the Spirit victory of the Sun
In the blessed Light of Christmas,
The sign of highest life
In the winter’s deepest night. ~Rudolf Steiner

“What is to be the starting force & impulse for events in social & ethical life must come out of the spiritual world.” Rudolf Steiner, New Spiritual Impulses in History” December, 1917 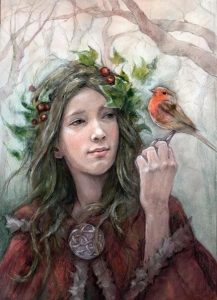 The O Antiphons, also known as The great Os are Magnificat antiphons used at Vespers of the last seven days of Advent in Western Christian traditions. The importance of the “O Antiphons” is twofold. First, each one is a title for the Messiah. Secondly, each one refers to the prophecy of Isaiah of the coming of the Messiah.

O Oriens – The Dawn Breaking, the Light of the World (A literal translation of the Latin yields “O Rising Sun”, but the poetic “O Morning Star” or “O Dayspring” is often preferred)

O Morning Star,
splendour of light eternal and sun of righteousness:
Come and enlighten those who dwell in darkness and the shadow of death.

Isaiah had prophesied: “The people who walked in darkness have seen a great light; those who lived in a land of deep darkness—on them light has shined.” ~Isaiah 9:2

Blue Christmas, also called the Longest Night in the Western Christian tradition, is a day in the Advent season marking the longest night of the year. On this day, some churches hold a church service that honors people who have lost loved ones in that year. There is an interesting convergence for this day as it is also the traditional feast day for Saint Thomas the Apostle. This linkage invites making some connections between Thomas’s struggle to believe the tale of Jesus’ resurrection, the long nights just before Christmas, & the struggle with darkness & grief faced by those living with loss 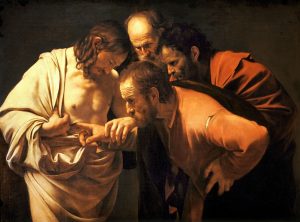 72 – Deathday of Thomas the Apostle, called Didymus which means “the twin” one of the Twelve Apostles of Jesus Christ, according to the New Testament. He is informally called doubting Thomas because he doubted Jesus’ resurrection when first told (in the Gospel of John account), followed later by his confession of faith, “My Lord and my God“, on seeing Jesus’ wounds.

Traditional legend written centuries later claim he travelled outside the Roman Empire to preach the Gospel, travelling as far as Tamil Nadu & Kerala in present-day India. According to tradition, he baptized many people, founding what today is known as Saint Thomas Christians or Nasranis. After his death, the relics of Saint Thomas the Apostle were enshrined as far as Mesopotamia in the 3rd century. In 1258, some of the relics were brought to Abruzzo in Ortona, Italy, where they have been held in the Church of Saint Thomas the Apostle. He is often regarded as the Patron Saint of India, & the name Thoma remains quite popular among Christians in India 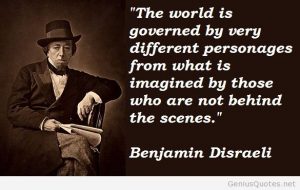 1804 – Birthday of Benjamin Disraeli, Prime Minister of the United Kingdom

1907 – The Chilean Army commits a massacre of at least 2,000 striking saltpeter miners in Iquique, Chile.

1910 – An underground explosion at the Hulton Bank Colliery No. 3 Pit in Over Hulton, Westhoughton, England, kills 344 miners. 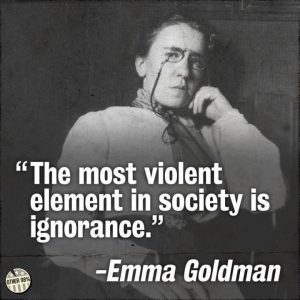 1967 – Louis Washkansky, the first man to undergo a heart transplant, dies in Cape Town, South Africa, having lived for 18 days after the transplant

1973 – The Geneva Conference on the Arab–Israeli conflict opens

2004 – Iraq War: A suicide bomber killed 22 at the base next to the main U.S. military airfield, the single deadliest suicide attack on American soldiers 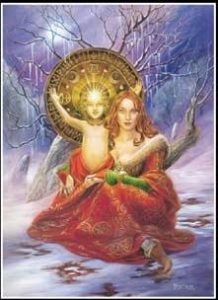 SOL INVICTA { THE FEAST OF THE UNCONQUERED SUN } The battle between old & new – Dark & Light…The winter solstice is the dark before the dawn, a time of renewal, giving us the most primordial myths of humankind: In Old Norse mythology, the Sun goddess was swallowed up by the wolf of darkness, but was reborn as her daughter, the maiden goddess of the underworld, who rose again to illumine the world. In Greece & Rome, midwinter marked the birth of gods, such as Mithras & Dionysus, who died & journeyed into the underworld, winning gifts for humankind before their miraculous rebirth. We must honor the dark before calling in the light.

The esoteric meaning of this time of year can be gleaned from the ancient mystery schools. In the Hellenistic world, initiates into the Mysteries of Isis had to undergo a ceremony of death & rebirth in which they entered the underworld to gaze upon the “sun at midnight.” This ceremony, which had its origins in ancient Egypt, speaks of the journey of the soul into the fecund depths of the subconscious mind, where we meet the Guardian at the gate, which opens to the dark sea of spirit from which all creation comes forth, purified & born anew. 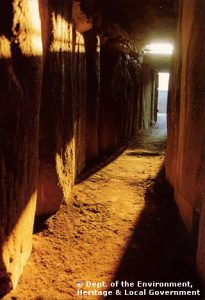 To this day people gather at sacred sites as far apart as Newgrange in Ireland & the temple of Karnak in Egypt, to celebrate the miracle of the sun’s return at the darkest time of the year – In the pitch-black sanctuaries of caves & earth chambers, to wait for the birth of new light & life. 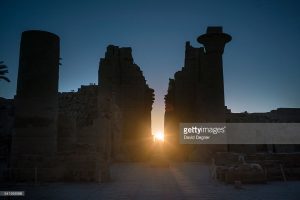 Of course when we strive to walk the modern path of initiation, working the 6 basic exercises every day, we don’t wait for the outward sun to shine, we must labor to give birth to the light within, for ourselves.

At a time when the fate of our planet & all her creatures hangs in the balance, let each of us journey down into the cave of the soul to drink from the secret well of wisdom & find the hidden flame within the dark — then return bearing our own unique gift of Light for the world.

The gift of the light (Gesture: Both hands scoop up light & bring it to your heart)
We thankfully take, But nothing may be, Just alone for our sake.
The more we give light (Hands move outward) The one to the other
It shines & spreads life (Arms move out horizontally, spreading light)
Growing still further,
Till every spark is set aflame. (Right hand in front of chest shows the proof of a flame.)
Till every heart, Joy shall proclaim. (Eurythmy Ah — arms up, palms upward)

May the cave of your heart be ever bright – 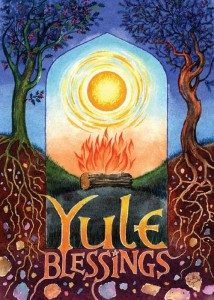